It’s easy to import a sequence of graphics frames as files, from which the switcher will automatically create a clip of moving video.

Firstly, you’ll need your graphics files on a USB memory stick.  The file type must be one of the following:

I recommend you use .tga files. The image size is also important – if you’re working in HD, you need a 1920×1080 pixel image.  The MVS won’t rescale or crop the image on import, so if it’s the wrong size, it will only fill part of the screen, or have data missing.

For this tutorial, we’re going to import a 30 frame sequence that we’ll use later for a clip transition. On the USB stick, we have the 30 frames, saved as the following file names:

The name is important – in order for the MVS to know that these files are a clip, rather than just random stills, they must have a name that consists of 4 characters – ‘STAR’ in this example, followed by 4 numbers, which must be sequential. So long as we observe this protocol, after import the clip will appear, with the name of the first 4 characters, i.e. STAR in our example.

Plug the USB stick into the connector (usually on the top right of the panel), then click ‘Refresh’ in menu 7317 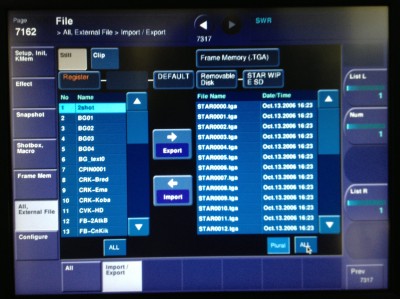 In menu 7162, select .tga as the file type from the drop-down box at the top of the menu. Navigate to the files on the Memory Card (USB stick). Highlight the files e.g. STAR0000…STAR0019, and click import. 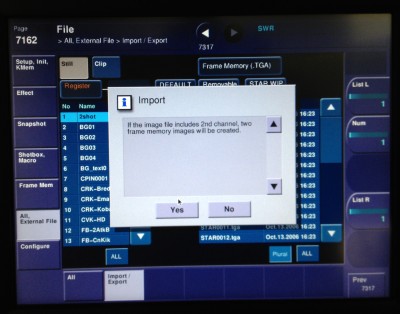 You’ll see a dialogue box explaining that if the file contains an alpha channel (matte), a pair of images will automatically be created – video and key.  Click ‘Yes’ to accept. 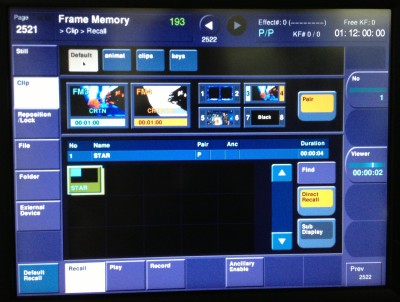 It will take about 1 second for each frame, including the alpha channel, to import.After the import is finished, the clip ‘STAR’ will appear in menu 2521. Remember to click on ‘Pair’ before loading the clip, to ensure that you load both video and key.