This tutorial uses the Clip Transition menu to create a graphics transition, or ‘Replay Wipe’, ‘SloMo Wipe’ etc. Plus a macro to automate the transition with a single button-press every time.

The animation is keyed on DSK3, from Frame Memories 7 & 8 – fill & matte respectively.

The Clip Transition operates on DSK2, with M/E2 as the key video, so that it wipes to the replay keyed over on M/E2, whilst the director can continue to cut cameras as normal on the PGM bus underneath the replay (the typical Sports Replay wipe).

DSK1 is available if I need to transition from or to a composite with graphic.

DSK4 is available if I need to key a graphic over the top of the replay etc.

Cut on DSK3, set key3 video source as FM7, check that key is set to linear & autoselect and that FM8 is the key source or matte.

Set the next transition to be DSK2 only, set key2 video source as M/E2, check that key is set to linear & autoselect and that WHITE is the key source (if not, then split key to white). 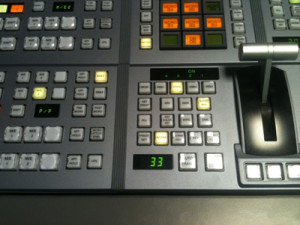 Now assign the Clip Trans function to a suitable button in the next transition block – I’ve used ‘super mix’:

Assign FM7&8 clip trans to the Super Mix button, click Set to save. 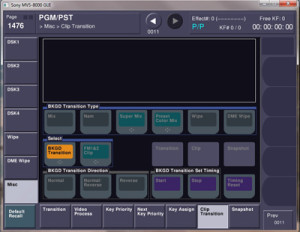 If the graphic never completely fills the foreground, or the key signal is never fully white (thank you gfx artist!), do a 3 frame background mix where the graphic is most opaque. This nearly always works visually. 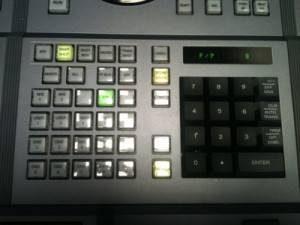 Save everything set up so far as a snapshot, for recall later in the macro. Store the P/P region only – in the screenshot I’ve used snapshot 8.

Recall P/P snapshot 8 & check that it loads the correct clip in the frame memories, turns on DSK3, and sets all the sources on the P/P bank.

OK, but I don’t want the snapshot to recall specific cameras – the transition needs to work with any source – so I’ll turn on XPT HOLD as follows:

Go to menu 6321 snapshot attribute.Click the grey button top left (in the menu shot it shows DME 1ch etc…, but it may show another region on your switcher) and select P/P as the master region in the pop-up – i.e. the P/P box lights green. Click OK, and check that the top left grey box now reads ‘P/P etc…’

Select snapshot 8 (or your choice if you’ve used another register) and click Xpt Hold button bottom left of menu.Turn Xpt Hold ON for all busses except DSK3, which remains off. There’s no need to re-save the snapshot – attributes just stay there until you modify them, or until you delete the snapshot. 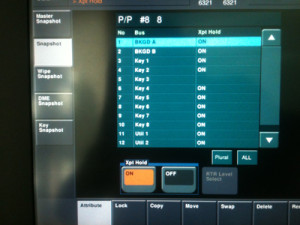 Now to create the macro that will recall all the above and run the clip transition, all with one keypress. First, open an empty macro register using the flexipad – in the screenshot I’ve used macro 21. 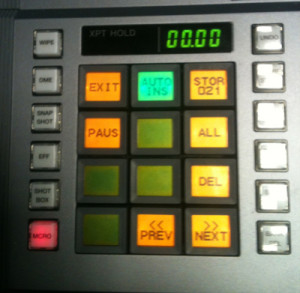 Record the following events in the macro:

The macro still needs some fine-tuning – I want to hit the macro each time there’s a clip transition, regardless of whether I’m going to the replay or coming back from the replay.  Right now, it runs perfectly the first time –  i.e. going from P/P to M/E2.  But when I hit the macro again to transition back to the P/P, it doesn’t work properly. This is because the snapshot recall at the start of the macro is turning off DSK2 each time. To fix this, go to menu 7335, select the P/P bank, and click the button on the bottom row called ‘Key Dsbl with Status’. This means that the xpt hold ignores the status of DSK2, and the macro works whether DSK2 starts in the on or off condition. 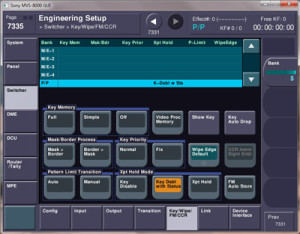